I don’t have an image which truly expresses the parched yellowness of the French countryside I travelled through recently.

France, in September when I was there, was dry, dusty and gasping for rain. I travelled through part of eastern France to Burgundy, the Dordogne and then northwards, on the western side on my way back to the UK.

In the eastern, near-empty areas, the fields were yellow, some admittedly because crops had been harvested, their stubble like a blonde buzz cut. This mainly agricultural area is one of lakes and big open fields, the yellowness unbroken apart from a few small woods and very few hedgerows. 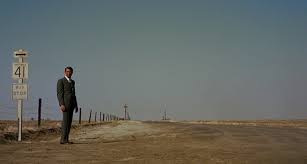 esn’t do hedgerows nowadays;  parts of it look like large prairies. The roads running through areas like this remind me of the scene from the classic thriller North by North West, where Cary Grant, standing at a bus stop in the US prairies  is attacked by a crop-spraying plane.

It’s a depressing fact that in France, shooters will take pops at birds and wildlife…but then what chance do birds and wildlife have to breed and prosper in an environment almost devoid of naural features like hedgerows?

The journey was made in warm sunshine. A clear blue sky with a few perfect cotton-wool clouds provided a stunning contrast to the yellow countryside. It wasn’t just harvested fields which were yellow; grass had turned to straw in meadows, and where the soil had been ploughed or tilled, the earth was varying shades of burnt umber, sienna and ochre.

France had had a summer of intense heat, which is why these yellow fields were in evidence pretty much everywhere I travelled. It was still very hot in the Dordogne, with July/August temperatures, making it the hottest I’ve experienced in this area in September. Not quite like usual. Not normal.

This is the new “normal” we have to get used to as climate breakdown sets in and time begins to run out to restrain or halt it. We’ll be having extremes of heat and wet, bringing flooding, disruption and danger to life (just as intense heat does).

This is just one of the concerns of Extinction Rebellion, who are bringing the breakdown of the web of life to public attention with peaceful demos and non-violent activities. Like it or not, environmental concerns are real and breakdown is happening now. Just keep an eye on the global weather and you’ll get the picture.